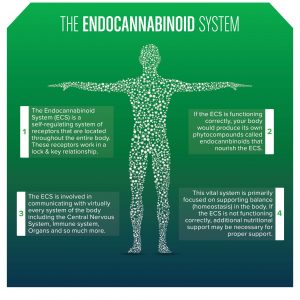 In high school health class or biology, you might have learned about the major organ systems in the human body: skeletal, respiratory, muscular, nervous, etc. However, it is unlikely that you learned about an additional system, the Endocannabinoid System, which is perhaps the most important physiological system involved in establishing and maintaining health in your entire body.

Research initially suggested endocannabinoid receptors were only present in the brain and nerves, but scientists later found that the receptors are present throughout the body, including our skin, immune cells, bone, fat tissue, liver, pancreas, skeletal muscle, heart, blood vessels, kidney, and gastrointestinal tract. We now know the endocannabinoid system is involved in a wide variety of processes, including pain, memory, mood, appetite, stress, sleep, metabolism, immune function, and reproductive function. Endocannabinoids are arguably one of the most widespread and versatile signaling molecules known to man.

For example, endocannabinoids might target CB1 receptors in a spinal nerve to relieve pain. Others might bind to a CB2 receptor in your immune cells to signal that your body’s experiencing inflammation, a common sign of auto-immune disorders.

Make It A Pain Free Day